Over the course of the project, different conferences took place to promote the project, as well as to contribute to the different objectives established for UrbanWINS.

The UrbanWINS Final Conference – The city as a living organism: understanding its metabolism to reduce its resource consumption took place on the 4th of April, 2019, in Brussels. Partners and stakeholders from all the countries involved and people interested from many different fields came together to share the experiences and outcomes from the three years of intense work and engage in lively and creative workshop sessions. The strong interest in the project demonstrates its relevance and raises hopes that other cities, organisations and stakeholders can build upon its results.

You can download each presentation from the event here: 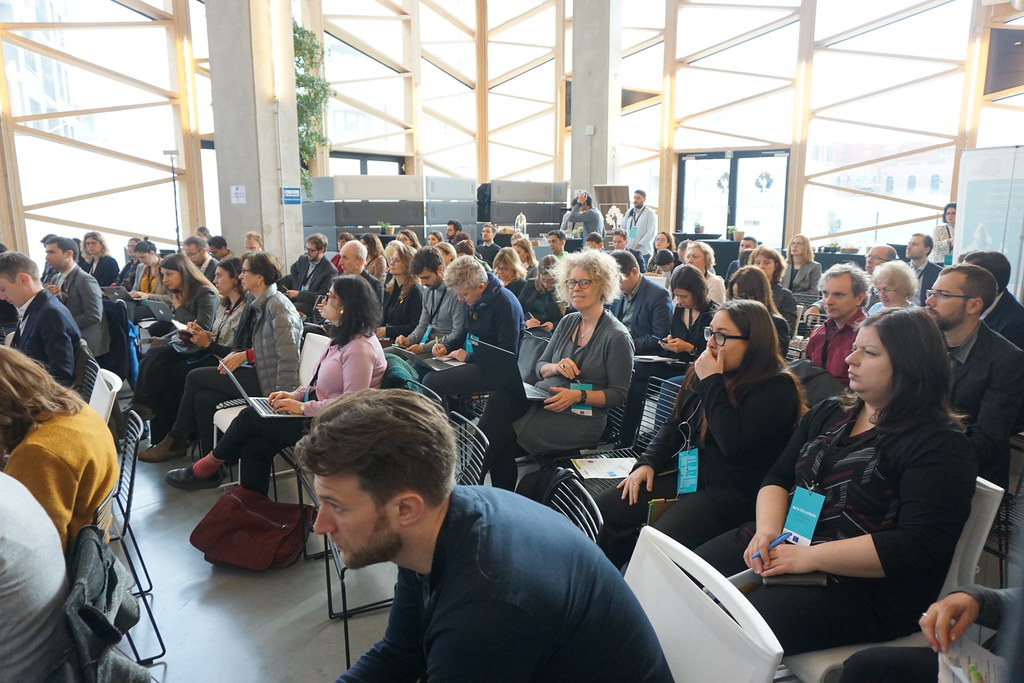 During the three years of the project, a total of six national conferences took place in order to share the developments of UrbanWINS, as well as to exchange ideas, challenges and approaches. Each of six countries involved in this project – Austria, Italy, Portugal, Romania, Spain, and Sweden – hosted one event.

UrbanWINS National Conference Portugal
The conference aimed at sharing the experience and preliminary results of the UrbanWINS project with the national audience of citizens, local authorities, organizations, stakeholders and academia. The conference took place on the 25th of June, 2018, in Coimbra.

UrbanWINS National Conference Italy
The conference was held within the framework of a bigger event that is the Forum CompraVerde-BuyGreen, International fair and conference on green procurement. It took place on the 19th of October, 2018, in Rome.

UrbanWINS National Conference Spain
Project partners and local governments were invited to learn about innovative ways of waste prevention and citizen participation. UrbanWINS project outcomes were presented and new models of waste management that promote infrastructure for a circular economy are showcased. The conference was held on the 23th of November, 2018, in Sabadell.

UrbanWINS National Conference Sweden
The conference in Sweden revolved around the question of how the Urban Metabolism approach can support cities decision making processes towards a more circular economy. It took place on the 21st of March, 2019, in Gothenburg.

UrbanWINS National Conference Romania
Main purpose of the conference was to share the experience of the Bucharest pilot city with other stakeholders, including local authorities, and to evaluate the applicability of the methodologies and approaches proposed by UrbanWINS in other urban and regional contexts. It was held on the 26th of March, 2019, in Bucharest.

UrbanWINS National Conference Austria
This conference focused on approaches to the development of cities and their surrounding areas (regional as well as global) until 2050 under different assumptions (sustainable future or business as usual). It took place on the 23rd of May, 2019, in Vienna.

The kick-off conference took place in Cremona (Italy) in September 2016. The purpose of this event was to share the approach of UrbanWINS and to clearly explain the different activities that will be developed within the project.

Some of the members of the European Advisory Board took part in the event.

This website uses cookies to improve your experience while you navigate through the website. Out of these, the cookies that are categorized as necessary are stored on your browser as they are essential for the working of basic functionalities of the website. We also use third-party cookies that help us analyze and understand how you use this website. These cookies will be stored in your browser only with your consent. You also have the option to opt-out of these cookies. But opting out of some of these cookies may affect your browsing experience.
Necessary Always Enabled
Necessary cookies are absolutely essential for the website to function properly. This category only includes cookies that ensures basic functionalities and security features of the website. These cookies do not store any personal information.
Non-necessary
Any cookies that may not be particularly necessary for the website to function and is used specifically to collect user personal data via analytics, ads, other embedded contents are termed as non-necessary cookies. It is mandatory to procure user consent prior to running these cookies on your website.
SAVE & ACCEPT
Share This